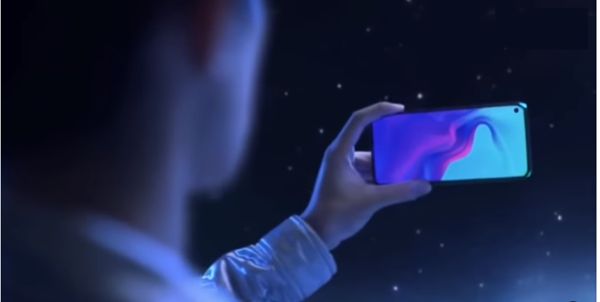 Huawei is going to launch another flagship Smartphone in the current month. The Chinese manufacturer is releasing Huawei Nova 4 with impressive specifications to compete Samsung Galaxy S10 and many other distinguished Smartphone.

The company has planned to launch the phone on 17th December in China. The official teaser of the device reveals that the Smartphone is coming with the “O-hole selfie camera. That means Huawei is going to leave the typical display trend and going to line up the unrivalled Smartphone to cover the maximum display area.

As the readers know that the leaks about the Huawei Nova 4 are coming out now and then, some specs are clearly revealed.  Huawei has now released an official teaser for the fans on Weibo page in China. However, it does not reveal any detail about the hardware.

The teaser contains the images of the phone from the front panel. The front panel seems like very similar to Infinity O-hole display in the Samsung Galaxy A8S.

Moreover, it will come with 6GB RAM to make the multitasking more convenient for the users. It will feature the 128GB internal storage. The shipment of the Smartphone will come with Android 9 Pie.

So, Huawei is going to launch another impressive Smartphone to compete the rival devices Galaxy S10 and Honor V20. The phone will come with all of the unrivaled features for the excitement of the users.