Home News India, The Most Dangerous Country for Women With Sexual Violence Rife

India is listed as the Most Dangerous Country for Women in the recent survey in 2018 by the Thomson Reuters Foundation.

In 2011, Thomson Reuters Foundation experts had a survey and formed a list of top 5 most dangerous countries of the world for women. The study was based on six critical factors including Health, Discrimination, Cultural Traditions, Sexual violence, non-sexual violence, and Women Trafficking.

The survey showed India occupying a place in the top five most dangerous countries for women with sexual violence rife. However, Afghanistan was declared as the worst country where the women are not given fundamental rights.

In 2018, Thomson Reuters Foundation again conducted a worldwide survey to check whether the previous condition still prevails? This time, India is on the top of the list of ten countries with violence against women rife. Here, the women are facing disrespect; rape, marital rape, sexual harassment, and assault. Furthermore, the girls’ infanticide is reaching beyond the limits. 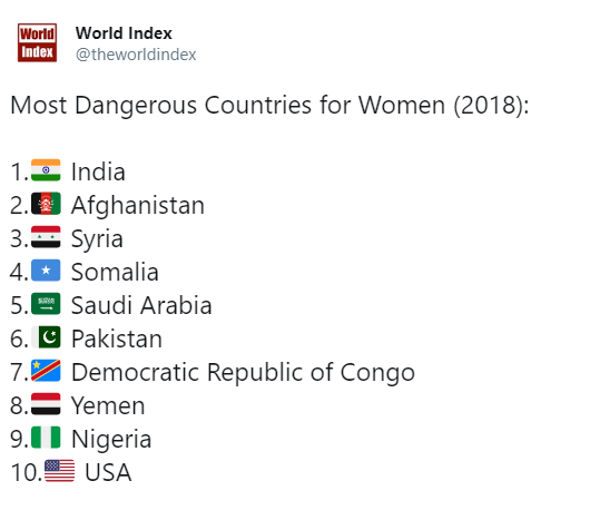 According to Manjunath Gangadhara, a spokesman from the Karnataka State Government, “the country is leading in various fields, but it is still shamed for violence against women. According to the official statistics, 83% of crime cases increased between 2016 and 2017.

So, every hour, four rape cases are witnessed in India. After the terrible incident of rape and murder of a girl student in the bus in Delhi in 2012, India needed to prioritize the violence against women, but the situation has become more dreadful than before, and India got the title of “The Most Dangerous country of the World for Women.”