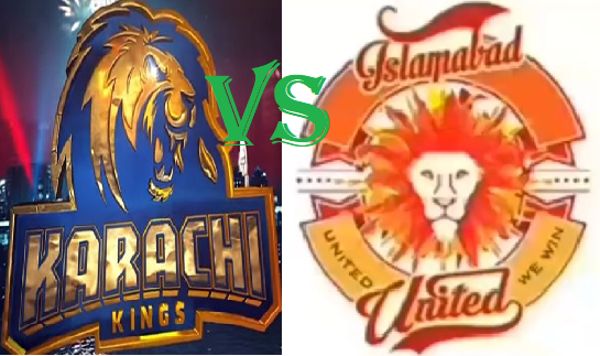 PSL 2019 has entered to its final round. The Eliminator-1 is going to be played between Karachi Kings and Islamabad United today. Both the teams will show their power in National Stadium Karachi today in match No. 32. This match is going to be very interesting and challenging because the winner will move ahead and the loser will go back home. Both of the teams are in high spirits to win the match today.

Islamabad United is defending champion for PSL 2018. It has a well-balanced team and big stars of the cricket world. So, the team lies at 3rd position on the Points table. Islamabad United has won 10 points, but the higher Net Run Rate makes the team a step superior to Karachi Kings. Earlier, both the teams have played two combats. In both, the combats, Islamabad United remains the winning team. It beats the Karachi Kings by seven wickets on 23rd February and again beats the same team by five wickets on 27th February. So, once again, the supporters of Islamabad United are in high hopes to witness an exhilarating match. Islamabad United won the PSL Trophy in 2016 and 2018. So, once again, the fans of the teams are hopeful for it to win the PSL Trophy. They have great expectations for a stunning performance of Luke Ronchi, Faheem Ashraf, Mohammad Sami, Sahibzada Farhan, Cameron Delport, Ian Bell, Samit Patel, and other players. Here is the team squad of Islamabad United for PSL 2019.

Karachi Kings have lost the earlier two combats with the Islamabad United. So, the team is at the 4th number in the PSL Points Table. However, it is the best chance for them to prove their abilities in the field as a team. Individually, the players are outstanding. But they could not prove their abilities in the field so far. Despite this grim situation, Karachi Kings has high hopes to win the title of the winner today. They will surely change the batting and bowling strategies today to carry the day. Karachi Kings has highest score 190/5 against Quetta Gladiators. The fans of Karachi Kings have great expectations from Imad Wasim, Babar Azam, Liam Livingstone, Colin Ingram, Colin Munro, Mohammad Amir, Usman Shinwari, Umar Khan and Ben Dunk. Here is Karachi Kings team squad for PSL 2019.